Earlier this year, I had my 2nd paid stand up gig one Friday night. Having felt like I was a bit rusty the night before, I knew I had a chance to do better, but the intense adrenaline to prepare for the show was wearing me down.

I was exhausted! I had knots in my shoulders that a girl guide would be proud of. I woke up feeling heavy and thought: “Oh no, I have to do it all again!”.

I used to think if I started the day that way, my day was doomed to follow in that energy, but now I know that we can turn ourselves around and create little miracles...

I knew that a tapping/EFT session would help ease my tension and anxiety and guarantee a better performance, but I was slow moving through my day and I ran out of time to do it before I left for the show.

I wondered if I could do it on the way there on the tram. But if you’ve done tapping, you know it’s not conducive to public viewing... it looks really weird and I usually cry - also not socially acceptable! 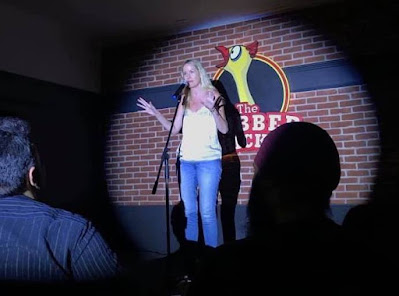 But then I thought: It shouldn’t be weird!!! It’s Reeealllyy good for you!!! Both tapping AND crying!!

So guess what!? I did it! I did a 30 minute tapping session via YouTube (with headphones) in a busy tram! I sat there tapping on my pressure points mumbling affirmations under my breath while tears gathered in the corner of my eyes!

I felt a bit self conscious as people stared, But I let go just enough to look super weird and let the technique do it’s thang. I started to feel more present with what I was truly feeling rather than trying to run away from it, and suddenly there was a distinct shift in my body. The tension lifted from my shoulders and my nervous system calmed down.

As I got off the tram I almost skipped down the street as I listened to a cheesy Justin Beiber song! I was in such an awesome state that it gave me the courage to take a risk...

I threw away the set I had planned and talked about what was really affecting me in that moment. I made it up on the spot! Up until that point I had always been so nervous for comedy shows that I had needed to rely on my practised material, but that night I was able to improvise!

It was completely different to anything I’d ever done before, I had no idea what I was saying but people laughed because I was telling the truth and I was being genuine. I was in the present moment, so things flew out of my mouth that I don’t expect! And it was so much fun!

I think I probably got more laughs than I would have if I did what I had planned, but I didn’t judge my performance on the reaction of the crowd, I focused on how it felt, and it felt so good!!! It felt good because I was connected to the present moment, because I felt connected to love and I was in my joy.

I felt so good inside that the reactions of other people didn’t even matter.

Which makes sense because the tap I did on the tram was all about not needing external validation and getting everything I need from the loving presence within me! During the tap I actually had a vision of standing on stage and the room was filled with a crowd full of my higher self!!

And that’s exactly the experience I had!

It was a great reminder that we can change our state at any time we please, that somatic therapies work like a charm, and that trusting our instincts and taking risks is always a good idea!

This is the tapping video I did: https://www.youtube.com/watch?v=vOOrSFBqE10