How a Romantic Comedy Movie Saved My Life

I had tears streaming down my face like a waterfall, so hot I’m sure my face was red, but the dark cinema was a good hiding place for my emotion to flow.

They were tears of sadness, relief, joy, awe, gratitude, aliveness. 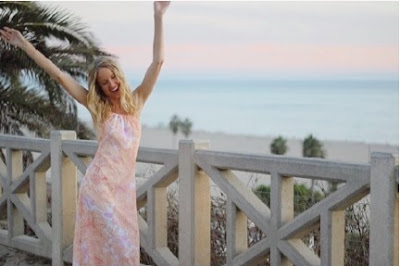 I laughed - not just a haha laugh… I laughed from the depths of my soul, while tears splashed off my face like twirling ice skaters.

Maybe people around me in the cinema could see my emotion, but I was so captivated, I didn’t care.

I was so gripped by the movie I was watching that I was pressed into the plush leather Gold class-esque movie reclining chair as if I was on the Gravitron ride.

I was watching Long Shot… a heartfelt and hilarious romantic comedy.

The reason I was so taken by this movie wasn’t just because I’m obsessed with Romantic comedies… it was because this film had just brought me back to life.

Flashback to 24 hours before...

I was sunken into my couch at home, but in a very different way to the cinema - home was Santa Monica, Los Angeles. I was living in a bright sunny studio apartment by the beach, taking risks, following my dreams, living my own rom com kinda life!

But at times it felt like I was living in a psychological thriller - I had an ex who was a little less like Seth Rogan and a little more like Freddie Kruger.

And on this particular day I was sunken into the couch like one of his victims - the couch was swallowing me whole.

I was drowning in secrecy and shame because I felt that I had no one to talk to about the trauma I was processing. When I was working through the trauma of my car accident, I could talk to people openly about it, when I had hip surgery, people knew how to support me…

But when I was working through sexual trauma, it was a whole other ball game (excuse the pun). It’s not exactly dinner party conversation appropriate - maybe at the end of the night when everyone’s sloshed! But I didn’t drink alcohol anymore and I was determined not to go back to alcohol to hide from this experience.

Not talking about it was literally eating me alive.

I had tried several attempts to get professional help… but every time I tried, things seemed to get worse. I felt like a character in a comedy - you know, where the writers think “What can we do to really push this character to their absolute limits?”...

I joined a domestic violence support group who were supportive, but while they were trying to validate our experience, it felt like they demonized some people unnecessarily, and that just made me more scared. One day I stood up for a police woman they were calling a narcissist simply because she was rude. Even if they had a point, I just couldn't live my life thinking the worst of everyone. They all looked at me like I was a traitor and the facilitator told me to put my sunshine back in my pocket. Hmmm... okay...

At one point I saw a therapist who I opened up to about my sexual trauma, it felt good to get it off my chest, but the therapist then divulged the details of what I had told him to my ex, who then used the information the therapist told him, to further manipulate, gaslight and abuse me. Okie dokie...

And finally, the night before the sunken couch day, after an abuse hotline hadn't been helpful, I had only one life line left - the top of the range support... the suicide hotline! The "support" worker sounded a little nervous, maybe it was her first day? When she suggested action for me to take and I replied with "I've already done that and it didn't help, what else can I do?" and she ran out of answers.... she hung up on me!… I got hung up on on a suicide line! Surely, this was the part of the movie where Ashton Kutcher jumps out and says "You've been Punked!"

But Ashton Kutcher never came. I hit rock bottom. I was having such negative thoughts that I thought I’d lost my capacity for joy. Positive quotes usually lighten my spirits in these moments… but my mind was so negative that positive quotes just made me feel annoyed rather than uplifted.

I felt like my spirit was broken. I had the thought, "Well, I guess I’m living my life with a negative mindset for the rest of my life now." But I didn’t want to live like that… I was ready to give up.

I desperately searched the internet for help. And I came across a YouTube video that was finally able to talk some sense into my negative mind.

After trying every possible avenue for connection from people face to face or over the phone, it was a stranger’s simple YouTube video that saved me in a very dark moment.

And it was the next day, after feeling like I could actually function, but still feeling numb and alone, that the movie Long Shot truly reignited my spark and brought me back to life.

This is the power of media. This is why I make movies and tell stories, because they have the power to connect us when we forget who we really are.

So if you’re ever feeling lost, lonely, or like you can’t go on. Just remember that there are millions of people around the world feeling exactly the same way as you. You are never alone. There is always support. Sometimes it may be a coach or a therapist, but sometimes, it’s a Youtube video and a blockbuster romantic comedy.