You Can’t Trust Anyone, But Your- Inner Guidance

One day I was walking along the board walk in St Kilda, Melbourne, when I saw a Convulsing Man around the age of 30 face down on the ground, convulsing. It looked like he was having an epileptic fit.  A Helpful Man around 35 was sitting on top of him trying to help him. The Convulsing Man was communicating different positions to his Helper and the man was eagerly following his directions, holding his head and arms back in strange positions, trying to help him get through the episode.

Many people continued walking by, staring, but they kept walking.  It always baffles me that so many people see people struggling and they just carry on with their day.  I can’t do that. I have to know that I did what I could, at least offered to assist in some way, or made sure the situation was being taken care of. 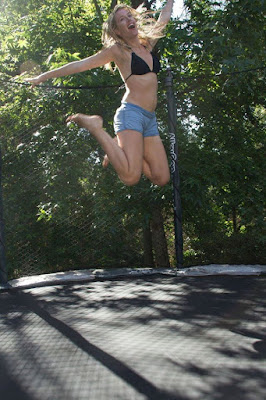 So I started to approach them to see if I could help, but then something strange happened… a stranger walked by and yelled out “He’s pretending, he’s not really having a fit, he does it all the time!”.

Suddenly the Convulsing Man stopped convulsing! Guilt spread across his face - he had been caught out! The Helpful man on top of him suddenly became very aware that he was straddling a grown man. Dread and embarrassment washed over his face and he quickly jumped off. The No-Longer-Convulsing Man immediately got up, and ran away, leaving Helper man feeling confused, humiliated and angry.

I did want to embarrass him further, so I walked away, but as I did, I thought: Next time Helper Man sees someone in trouble, he probably won’t stop to help!  And that made me angry.  I thought about how people who lie and cheat deter people from wanting to help because they lose trust.

But soon after this experience I was “gifted” with the traumatic experience of dating someone who constantly lied, manipulated and gaslit to get what he wanted. And although it was painful, and I was close to losing trust in people altogether, in the end, I was grateful because I learnt a valuable lesson.

After constantly overriding my inner voice to trust someone else’s lies, I realized I had 2 choices:

2. use the experience to learn how to listen to my instincts

I chose to fully commit to listening to my instincts.

These experiences aren’t about losing trust in others, they’re about learning to trust ourselves.

I used to think that the saying “you can’t trust anyone but yourself” meant that other people aren’t trustworthy, but now I understand that when we trust ourselves, it doesn’t matter if others lie or cheat, because when we’re connected to our instincts we know how to remove ourselves from these situations before we get hurt.

When someone says “you can trust me” and we override our gut feeling that’s telling us that this person is not trustworthy, we’re trusting them more than we’re trusting our guidance system, and this causes us to lose trust... in ourselves!

When we get angry it's usually because we knew deep down not to trust someone, but we let them convince us otherwise.

This is when most people give up faith in humanity or lose trust in people, I know I did for a time.  But now I understand that the lesson isn’t “You can’t trust anyone!”, the lesson is “I can trust my inner guidance!”

This extends to people in positions of power and professionals in their field, such as bosses at work, teachers, doctors, and especially psychologists.  We must never assume that someone else knows us better than we know ourselves.  A good practitioner will give us the tools to tap into our guidance system, which tells us everything we need to know.

And although people who lie and cheat to this extreme can hurt others, it doesn’t make them bad people. The man who pretended to have an epileptic fit in public really does have an issue - not epilepsy, obviously - but he is deepy unconscious.

Imagine having such an intense desperation for human connection that you feel you have to lie and cheat to get it.  We can have compassion for people who behave like this, as long as we put trust and compassion for ourselves first. And when we're able to do that, we have a lot more to give others.