We’ve all heard the saying “we are what we eat”, that what we feed our bodies changes, not just our bodies, but also our mind.  But what's talked about less is what we feed our mind and how that affects our brain and mental health...

We are what we watch.

When it comes to media, our minds are like a hungry hungry hippo. They’re constantly hungry for information, entertainment, stimulation. They’re ready to munch on anything we’re exposed to. It’s up to us what we feed it.

Do you binge watch Netflix, do you graze on the news throughout the day, or do you pig out on junk television you don’t like because you can’t get off the couch?  (I've been there!) When you satisfy your media appetite are you conscious of the ingredients of what you’re chewing on?

Are we feeding our minds junk media or healthy media? How does this affect us, and what can we do to develop healthier watching habits?

1. What is Junk Media and Healthy Media?


Just like we feel the difference in our bodies when we eat junk food or healthy food, we also feel positive and negative emotions depending on the media we ingest.

How do we feel when we watch a disturbing drama, crime show or horror film?  Tightness in our chest, anxiety, fear?

Compare that to how we feel when we watch a romantic comedy film?  ...Maybe tightness in our chest, anxiety, and fear... in a bad Hallmark film.  But more often, just like healthy food, romantic comedies are nourishing and elicit feelings of love, joy and laughter.

Knowing this, why would we choose to watch content that causes us to feel negative emotions over positive emotions?

If we're facing our fears in our daily lives, do we need to experience them vicariously through television and film? We might think we enjoy the thrill of watching a violent or disturbing film and argue that it feels good at the time, but at what cost?  What is it doing to our nervous system?  Just like when we eat junk food, we think it tastes good while we're eating it, but it makes us feel sick later and affects our health long term.

2.   How are our Watching Habits affecting us?

We don’t have to be a neuroscientist to understand how powerful media can be, all we have to do is look at the billions of dollars that are spent on a 30 second Super Bowl commercial to see the influence media has on our mind.  I know if I see a good burger commercial, I’ll be having a burger that week!
What we watch has the power to affect our choices and ultimately our world view.  Our outlook on life determines whether we live a happy or solemn life and when we watch more content that reinforces a positive world view, it helps us maintain a lighthearted perspective.

Studies at The Mayo Clinic and Yale found that optimists have a 77 percent lower risk of heart disease than pessimists, and that happy people live seven to 10 years longer than unhappy people.

The book The Tipping Point discusses a study on suicides where they discovered that when suicides were published in the newspaper of a particular town, there was a considerable rise in the suicide rate, compared to when they weren’t published.

If merely reading a newspaper article can increase the suicide rate in a town, imagine what repeated exposure to violent film and TV does to our minds.  There are always variables, but we can’t deny that we’re influenced by what our mind is exposed to.

3.  How can we develop Healthier Watching Habits?

Food comes with a detailed ingredients and nutrition label, and films come with a rating and synopsis informing us of the ingredients of a film. Are you reading the media “label” for pure entertainment, for taste, or are you choosing your media consumption for nourishment purposes?

I recommend a media diet high in “love” and low in “fear”.  As long as love is the dominant emotion, it’ll override fear more often.

Check out my MEDIA CONSUMPTION PYRAMID for my daily recommended intake: 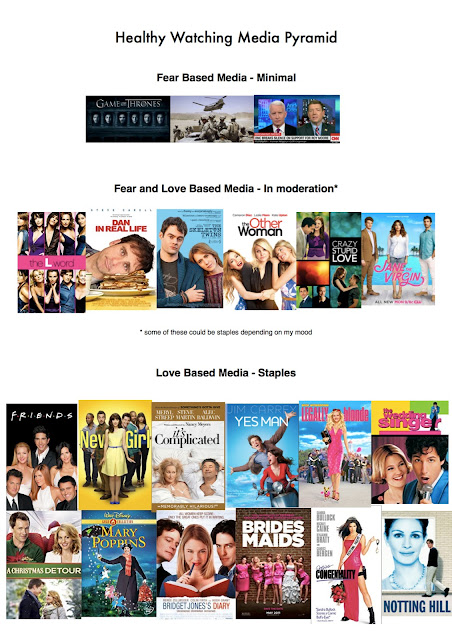 To be clear, these are my choices, for me. I recommend everyone taps into their own guidance system. You decide what films make up your media intake, according to the way films and tv make you feel.

In feeling it out, it's important to recognize that there are violent action films that have a positive, uplifting world view, like the film Lucy, and there are comedies that have a depressing world view, like the film Blue Valentine. How do you feel about life after you watch it?  Do you feel loving, joyful and inspired, or guilty, disturbed and depressed?

I'm one of those people who cries in super lame commercials, so you can imagine how I feel watching the news. I don’t watch it. I learnt at a young age that watching the news upset me too much. I didn't like the feeling of seeing people in pain and feeling like I couldn't instantly do something about it. People have always warned me that not watching the news could mean danger, ignorance and apathy. My experience has been the opposite.

I’ve found that when we’re not emotionally bogged down by the problems of the world, we’re in a better space to do something about them.  When we get angry about war, injustice, or Trump, we’re just creating more of what we’re fighting against.
Fear can’t drive out fear, only love can do that.

But don’t take my word for it. Find out for yourself...

Firstly, when watching film and TV, notice how media makes you feel and make a list of your junk media and healthy media. Create your own Media Consumption Pyramid.

Then for 21 days follow these steps...
If we watch too much Nightmare on Elm Street is Freddy Kruger going to come and get us...  if we watch Bridget Jones' Diary on repeat are we going to marry Colin Firth?
Maybe... maybe not...

What I do know is that despite having had my share of horror film experiences, my life most often feels like a romantic comedy, complete with twinkling Christmas lights, side splitting laughter (even in pain), unconditional love, kindness from strangers, fulfilled dreams and magical, serendipitous moments... and I watch a lot of romantic comedies.

What if more of us watched predominantly positive, uplifting media. Could we turn the tide of anxiety and depression, could we raise the emotional health and happiness of communities?

We know that we’re the writer and director of our own lives and it’s up to us what kind of film we want to make. Do you want the anxiety and fear of living in a horror film, or do you want to laugh and love, and be the star in your very own romantic comedy?  The choice is up to us…