Eckhart Tolle says: “Stop looking outside for scraps of pleasure or fulfilment, for validation, security, or love - you have a treasure within that is infinitely greater than anything the world can offer”.

So how do we access that treasure?  We’re not pirates!

Eckhart Tolle is the author of bestsellers such as The Power of Now and A New Earth.  But more important than him being a writer, he’s a profound spiritual teacher - an endearing, quirky little German man known for his gentle, egoless presence, his contagious laughter at seemingly inopportune moments, and his incredibly long pauses between sentences.

His teachings help us let go of our analytical mind and accept “what is” in order to access presence. And in this space, what he calls "living in the now", we're able to dissolve fear, depression and anxiety and connect with more peace, joy and love.

Like the true Eckhart groupie that I am, I trekked out to lush green New York State for one of his retreats where he dazzled me for days with his "presence" and talked about various spiritual concepts, including “Doing” and “Being”.  He used himself as an example of a “Be-er” and Oprah as an example of a “Do-er”.  He explained that the more we practise “Being”, the more our action to "Do" is inspired, rather than forced.

I’ve always been a “Doer”.  “Go hard or go home” was my motto for a long time and I applied it to my work, my study, my party days.  So initially this idea of just "Being" was very challenging for me.  But the more I practise letting go, the more easily problems evaporate, solutions come to me quickly, and the more magical experiences I have.

After all, we are human-beings, not human-doings...

When I first moved to LA, I was practising this “acceptance of what is” and I had a particularly enchanting experience that completely blew me away…

One morning I was writing a concept for a TV series with the theme of “coming home”. Just like in The Wizard Of Oz, I was exploring the concept of There's no place like home… that “home” is that feeling of love within us.

I sat at my laptop crunching out half-assed sentences before staring at the screen in a daze of indecision.  I had writers block. But instead of banging my head against the wall and forcing myself to keep going, like I had done in the past, I decided to go for a run.

I cranked my favourite soundtrack - Girls Just Want To Have Fun!, and as I bounced down the street, I was feeling inspired already!  I felt the adrenaline pulsate through my body and the uplifting 80’s beats dance in my heart, when all of a sudden my absolute worst nightmare happened…

My music stopped working, aah!  First world problem alert!  Running without music is not fun.  So I almost turned around and went home. But…
I remembered Eckhart Tolle’s words “Let go and accept what is…”  So I was like… “Okay, let's see what happens!” And I kept running.

As I jogged along the cliff running track overlooking the water, I immediately regretted my decision.  Instead of the usual rush of inspiration, all I could feel was excruciating pain.  I dragged myself to one of my favorite look out points and stopped to stretch.

The stretch was so painful that tears came to my eyes and with no music to soften the blow, I felt all the frustration in my body.  I heard Eckhart Tolle’s words again…"Let go and accept what is"… and I thought "Okay Eckhart Tolle, you asked for it!"... I allowed my resistance to bubble up to the surface and it got so intense I whimpered… which turned into tears, which eventuated in, yes - a PDB… a public display of blubbering!

Snivelling, with tears streaming down my face, I realised I actually did feel a little better, but I pretty much gave up on it being a “fun run” at that point.  I accepted it for what it was and turned to head home.  I jogged toward my last lookout point - one final attempt at inspiration.  But someone else was standing there.  I almost didn’t stop, but I thought “Darn it Eckhart Tolle we’ve come this far!”

So I accepted what is, I pushed through my self consciousness and strode up next to the stranger...

I jogged on the spot next to him, looking out to the water.  The “Do-er” in me wanted to keep my heart rate up, but I felt like a silly fitness maniac jogging next to this totally chill dude with his hands out soaking up the sun.  So… like the good Eckhart Tolle student I was, I accepted what is… and this time I really let go.

I also put my hands out to soak up the sun, I took a deep breath, and as I felt myself relax, out of nowhere, the stranger beside me swung his guitar over his shoulder and started to play ethereal, angelic music.  As the music swept me up, I felt as if I was transported into a magical Disney film!…

Birds glided high in the glorious blue sky, the sun glistened on the water like glitter, butterflies danced around us, and the fresh ocean breeze blew it’s mystical warm breath into our lungs.

He sung of our inner child, the ocean, peace and the revolution of love, and although I didn’t know the lyrics by mind, I knew them by heart, and I felt I was singing along with him. Freakishly, his lyrics reflected the words I was trying to crunch out on my laptop only half an hour before.

I thanked him for his beautiful music and when we exchanged names (his name was Colin) and details, I found out that his email address was… wait for it… “home here and now”.  I told him that that was crazy because I was writing a TV concept about coming home and that I’d come for a run to clear writers block. He said he had come to the water because he was trying to clear musicians block and he pointed out that he was wearing a hat that said “HOME”!

And as I reflected on the experience, I realized that each time I had let go and accepted “what is” in the moment, it had allowed me to take the next step in my “journey” that lead me to my Disney-style experience with Colin.

Had my music been working, I never would have stopped jogging for long enough for him to serenade me. If I hadn’t allowed myself to release my resistance as I stretched and had a PDB, I wouldn't have felt open enough to push through my self consciousness and relax into the moment, and if I hadn’t accepted that my music stopped working and kept going, none of this would have happened in the first place.

I didn't quite know what divine intervention was, but it felt like something of that kind.  In that moment I could feel I had cured my writers block, and I knew when I got home the words would pour out of me like lava, but that wasn’t the point.  The point was that I was enjoying the moment, the “journey”.

I experienced how when we’re not attached to the end result, we're open to opportunities along the way and that’s where we discover the true magic.  I had found the treasure that Eckhart Tolle talks about and it was so much more than I expected.  Often what the universe has in store for us is so much better than anything we could ever possibly imagine.

And when I finally pulled myself away and said goodbye, my new friend flashed a genuine eye squinting smile at me and said… “Just remember… I’m Colin you home”. 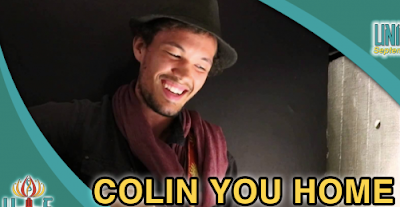